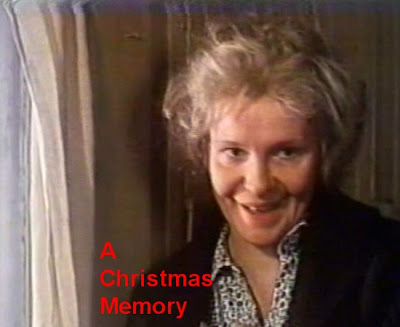 "A Christmas Memory" is a short story by Truman Capote. Originally published in Mademoiselle magazine in December 1956, it was reprinted in The Selected Writings of Truman Capote in 1963. It was issued in a stand-alone hardcover edition by Random House in 1966, and it has been published in many editions and anthologies since.

The largely autobiographical story, which takes place in the 1930s, describes the lives of seven-year-old Buddy and his elderly cousin Sook, who is Buddy's best friend. The evocative narrative focuses on country life, friendship, and the joy of giving during the Christmas season, and it also gently yet poignantly touches on loneliness and loss.

Now a holiday classic, "A Christmas Memory" has been broadcast, recorded, filmed, and staged multiple times, in award-winning productions.

This has to be my all time favorite Christmas film. An obscure gem that is hard to locate on video. A MUST SEE ~ This defines the true meaning of Christmas for me.

"It's fruitcake weather..."
Presented by Christopher A. Klingler

this looks like a sweet story. all 8 minutes of it. You've got me wanting to know more :)

All I can think about when I hear that man's voice is the previews to that movie Capote, which I haven't seen. I see now that the actor (Philip Seymour Hoffman) did a very good job at recreating the voice!

Hi Chris! Just wanted 2 stop in and see how u r doin and to wish you and yours HAPPY HOLIDAYS;)

Thanks for stopping by Jaime & Geri.

Wow, I have seen it as a play before several times...did not know there was a movie. Definately checking it out. Thanks for the recommendation!

Chris if you like the play you will love this original film version!